At the heart of it, successful athletes share many commonalities with successful business people. Both pursuits require dedication, tenacity, a competitive spirit and the ability to draw on the skills of talented teammates in order to rise to the top. It makes complete sense for professional athletes to parlay their experience in their chosen sport into a winning career as an entrepreneur.

With all these variables, I was intrigued to hear from two of the keynote speakers at this year’s WBENC Summit & Salute convention, held this past week in Arizona. Nastia Liukin, a former Olympic champion gymnast turned motivational speaker and entrepreneur, and Dr. Jen Welter, a psychologist who made headlines last year by becoming the first female to coach in the NFL, both gave fascinating talks – albeit in very different styles – about how their experiences in sports translate to business.

A common theme running through both keynote speeches was the importance of developing a resilient mindset. As Ms. Liukin noted, “You will fail, but you have to get back up.” I was also particularly struck by her advice to “never quit on a bad day” which neatly encapsulates the need as a business owner or leader for both perspective and perseverance.

Dr. Jen Welter’s striking account of being a trailblazer in a hugely male-dominated field and the importance of finding ways to help other women follow in the wake of your success was very well received by the captive WBENC audience members. Talking about her experience in pro football, Dr. Welter noted that she felt that “if I was not very good, it would close the door for other women.” What is inspiring is that instead of being crushed by the recognition of the responsibility of being first in a field, she used it as a source of motivation and made her success, when it came, so much greater than a simple personal achievement.

Dr. Welter also spoke powerfully about the HeForShe campaign, a global movement for gender equality created by UN Women. The aim of the campaign is to get men and boys involved in (and educated on) taking action to resolve gender inequality issues facing women around the world. She spoke eloquently on the key role men (be they mentors, managers or family members) need to play in supporting the notion of being successful and that gender equality truly does mean great opportunity for all. Cheers to that!

Once again, I came away from the Summit & Salute feeling inspired and energized. Many thanks and congratulations to all at WBENC for a great event! 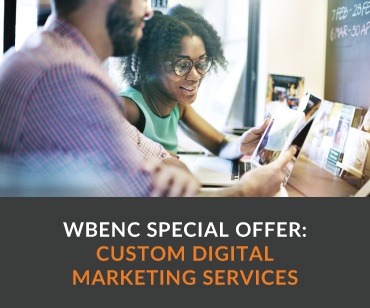